How to cheat Turnitin: a complete guide to unique essays

Plagiarism is considered to be one of the greatest violations a scientist can commit. Educational institutions all over the world aspire to foster diligent scholars capable of contributing to the development of science. When scientists use what other scholars have already written or said and present it as the result of their own mental endeavors, their so-called “research” doesn’t bring anything new to the world of science. There is no point in doing expensive research if it doesn’t contribute to scientific development, and this is the most pragmatic reason that plagiarism can lead to the loss of one’s scientific reputation and a broken career. 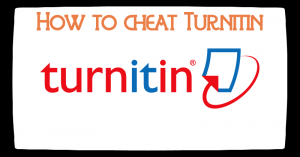 To avoid plagiarism in professional science, the educational system teaches both children in the elementary school and students in colleges to stick to the principles of academic integrity and omit plagiarism from papers. The use of sources without proper credits being given to their authors can lead to expulsion from college, let alone low grades.

Unfortunately, for various reasons, students sometimes use pieces of text from manuals, articles, and websites without citing them properly. And since today there is a lot of plagiarism-detection software which scans pieces of the text your teacher downloads and compares it for similarities with every piece that has ever been published, the chances of getting caught cheating are high.

One of the most popular programs many educational institutions in the US use is Turnitin.com. It is considered to be quite an efficient algorithm to spot plagiarism in the students’ papers. However, it still has its flaws, and here are some tips on how to beat turnitin in both legal and trickier ways.

How to trick turnitin in a legit way?

The most efficient method to make sure that Turnitin doesn’t find any similarity between your paper and the books, articles, and websites it has in its database is by paraphrasing the quotes you have used.

There are concepts like “molecule,” “speed,” “universe,” etc, which cannot be replaced by synonyms. Fortunately, you can paraphrase the rest of the article you’ve read and want to use in your paper without being accused of plagiarism. Use a Thesaurus if you lack the necessary vocabulary and can’t come with a bunch of synonyms for common words on your own.

Put the idea into your own words

Read an article several times and try to recreate it in your own essay. Don’t look back at the original text. It is quite possible that your writing will be less flawless than the initial source, but remember that you’re only a student and it is okay to have a vocabulary less classy than those of the professional writers whose work you’re using as a source of inspiration.

If you’re still afraid that you might be accused of plagiarism when you paraphrase the sources, give credit to them in the bibliography section. If you have paraphrased an article from Wikipedia or another source that is not considered reliable, check out the references section below the article and find the initial sources that the person who wrote this Wikipedia piece used in his or her work. Cite them if you want.

Before you turn in your task, double-check it with a plagiarism-detection tool that doesn’t save your piece of text in its database. If it spots a match between your text and some source you haven’t cited, work harder on paraphrasing the section in question.

Other tricks on how to get 100% uniqueness on Turnitin

If you need a high grade on a paper due in several hours and don’t have the time to work on its originality in a legit way, here are some amends you can make to your text to decrease the chances that Turnitin will spot plagiarism in it.

Change the order of phrases

Turnitin is an example of personalized software, and every teacher can set the parameters of how it works. In most cases, this tool looks for text matches that are longer than 3 words. This means that “red blood cells” won’t be marked as a match with another source, while “He observed a “lumen,” the nucleus, in the red blood cells of salmon.” will be identified as a plagiarised sentence. You can also change the word order in the sentences you use.

Switch the singular into the plural

“They have discovered” instead of “the group of experts has discovered” will erase several percents of plagiarism in your paper from the Turnitin report.

If you’re writing in English, insert some Cyrillic characters in your paper instead of the Latin ones. Pay attention to the letters “a,” “o,” “e,” “c,” “p,” and “x.”

Insert two spaces where only one is needed and the Turnitin algorithm will face another obstacle in scanning your paper.

Break down and join together sentences

If there is one long sentence, you can break it into several separate ones, and by doing so, both increase the readability of your paper and trick the software scanning your text for similarities.

If there are several short sentences or phrases in the initial source, merge them together into one with the help of a colon, semicolon, dash, or linking phrase.

Save your paper in PDF format

This might also decrease the chances that the Turitin algorithm will spot plagiarized pieces in your text.

If you decide to cheat Turnitin with these methods, use them concurrently to increase your chances of getting a report with a high-originality index. The thing is, plagiarism-detection software is updated every month, and the more wide-spread the tricks students use become, the better chances that the Turnitin coders will take them into consideration when the new version of the program is released.

About me
Hello there! 👋

My name is Melanie, and I am the founder of LegitimateEssayWriting. Our team checks, reviews, and rates academic writing services for you. So if you’re trying to find a reliable student help website, you’ve come to the right place.